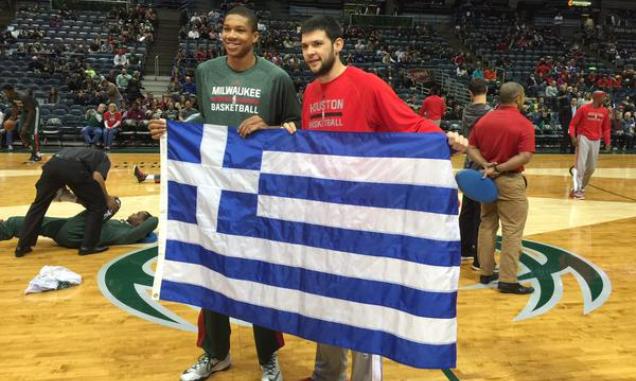 Giannis Antetokounmpo and Kostas Papanikolaou battled against each other for the first in the NBA. The Houston Rockets pocketed the easy 117-103 win against the Milwaukee Bucks with help from Big-Papa who scored 12 points, while the Greek Freak finished with 17 points under his belt.

Just before jump-ball the two rivals posed proudly in front of the Greek flag, in honor of the country they were born and raised in. Greek fans from all over the States attended the match, which to them was definitely the most notable game of the season.

As far as the game’s concerned, both representatives had honorable performances, turning the spotlight on them and pleasing everyone who decided to watch the Greek clash.

Giannis was spectacular once again ending the night with 17 points, 7 rebounds, 2 assists and 2 blocks with two of his dunks making it into the top-10 of the night’s best plays.

Kostas on the other hand had 12 points (3/4 2ps, 2/2 3ps), 3 rebounds and 4 assists while also producing his first “in your face” dunk of the season over the Buck’s center Larry Sanders.

With this win, the Houston Rockets climb up to 3rd in the Western’s conference standings, while the Milwaukee Bucks drop to no5 in the East.

The &quot;Greek Freak&quot; Turns 25 Today and Everyone is Celebrating With Him